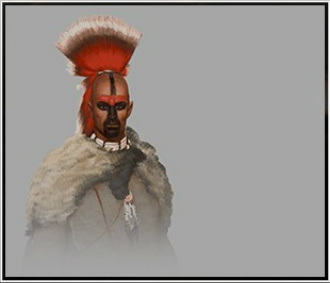 Listen sweetling. The silent scream. The deafening silence. Something rots in Kingsmouth. Something groans in the Blue Ridge Mine. An evil fog creeps. The earth screams, "Remember, People of the Dawn! Remember!"

Indifference and generations of fast food choke the old wisdom, and remembering is difficult. To remember from the communal pools is like grasping dreams - like pulling away the fog with bare hands.

The putrescent vapour dampens our sight. The secret histories blur. What is time to us? We stand outside. Everything has happened. Everything is happening. Initiate temporal echo location. SHRIEK!

The Wabanaki - of the Algonquians - the confederacy of five tribes: the Abenaki, Penbscot, Maliseet, Passamaquoddy, and the Mi'Kmaq - native people of the Dawn Island: New England, Quebec and the Maritimes.

The Europeans come. The Wabanaki fight many bloody wars to defend their land, but the Old World is a disease the New World has no antibodies for. The Great Dying. "Ruin!" croak the ravens, and pestilence spices their food. The Confederacy crumbles in the year of the affixed god 1862, but the Wabanaki name lives on. Names are living things. 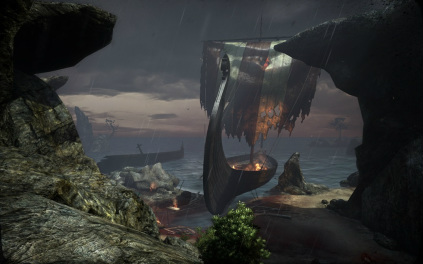 The earth remembers the People of the Dawn. In Solomon County, in Kingsmouth, the land knows the Wabanaki's touch going back thousands of seasonal iterations. The memory of the people fades - your meat minds have expiration dates. Few remember the responsibility of the Kingsmouth Wabanaki.

We remember sweetling. We stand outside of time. We gather the bad memory waves trapped in the dreamcatchers, sweeter than pollen. A thousand years ago, and a thousand years before that, the Wabanaki shamans dance the containment dance. They know their holy land is a resting place for something sinister, imprisoned there since the Before. They know it will destroy the world.

"The Darkness War!" screech the dreamcatchers. The medicine men, the dream dancers, conjure wards with doodlebug spirals in the shuddering earth. The cyclopean malevolence must be kept dreaming. The sleeper must never wake.

Norsemen arrive, in their longboats, and bring an artifact to the Wabanaki. Its transcendent vibrations amplify the wards, make them sing. It becomes the only key that can open the door. The Vikings take it back with them, across the ocean.

The secrets of ward maintenance are passed down the generations. But entropy ends dedication when flavoured with time. Indifference pushes the People of the Dawn apart. Indifference and something else... Skulduggery, sweetling! A malefactor! We detect an outside influence. 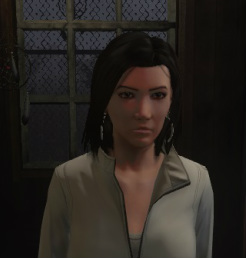 The Blue Ridge Mine echoes with a gunshot from 1971 - a foreman killing a shaman. Members of the tribe are jailed when mine workers catch a case of murder. "innocent" proclaims the court, and the tribesmen are released and given a large piece of land as settlement.

There is no greater lubricant to argument than wealth. A large amount of money is offered for the land in 2005. The tribe argues. Some wish to sell and finance a casino. Some remember, faintly remember, something important, like a yarn noose choking a finger. What was it? They know they must keep the hill.

The land is sold. The tribe splits in two. An unreasonable anger gnaws their hearts and widens the divide.

The current dream dancer remembers. She knows the corpse of the ward is the only thing that keeps the fog surrounding Kingsmouth at bay. She cannot maintain the ancient power alone. The others must remember. Differences must be sloughed off. The Hound of the Nameless Days yawns. The earth must be tickled before it feels scorned.

If it is not already too late. It probably is.

We'll be seeing you, secret worlder. In time.
Powered by