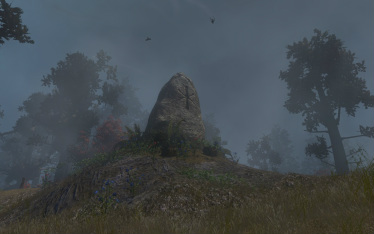 In the cradle of the Nameless Days, the leopard of the smoking mirror shall eat the moon and sun. There is no beginning. There is no end. Invisible mouths devoured them, from either side, as a prelude to a hideous kiss. You will see them in time.

A runestone stands on Solomon Island. The Vikings came to Newfoundland, Nova Scotia, and Labrador a thousand years ago. This is known to your archaeologists. But did they come to New England? This is disputed. And yet the runestone still stands. Occasionally fair-haired children are born to the native tribes, and a few of the elders will look to one another knowingly. The stone shouts Norse runes for those with eyes to hear.

What is time to us? We stand outside. All things have happened. All things are happening.

You must go, sweetling. Soon, your tenses will tangle. Time is merely another dimension. There is right and left. There is the X axis and the Y. There is the past and the present. You have only to walk sideways, like a crab, down the curve. Step! 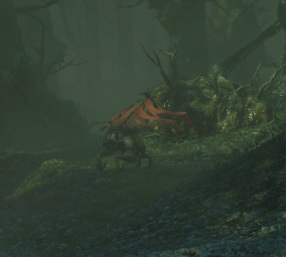 The Vikings sail. They lope the waves as wolves. More than just raiders, they are also traders and explorers. They journey to what you just called Maine a thousand years from now - though their purpose is neither to raid nor trade. They came for a battle - the ageless battle - the clash of archetypes - an equation that must be computed. These conflicts happen in all points of time, across the ages, simultaneous to our omni-faceted eyes. Duality must be vicious.

On the island that will be called Solomon, the native Wabanaki tribes protect a holy ward against an invading force of sun worshippers from the far south. These Mayans march with monsters. The ak'ab! The ak'ab! Fell the dread weight of the name on the tongue.

The invaders bring sorcery and greater numbers. Hope flees the Wabanaki, but returns via the oddest messengers. Ornate longships take the beach. Norse screams of bloodlust sound. The Wabanaki are joined by fair strangers whose leader wields a bizarre sword that glows in the dim.

There are events that are supposed to happen - have happened. The Wabanaki and the Vikings should defeat the Mayans. There should be a celebration on the island. The Wabanaki should think the pale-skinned saviors are spirit totems. 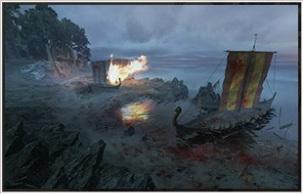 The Norsemen will explain that they were sent by a vision from their own gods, told to go west and help a dark skinned people defeat the Jotun with a weapon gifted by Odin himself. They will tell tales of setting sail, and raiding a small monastery on a desolate island outside of Scotland, where they found a strange device they can only liken to a sword. On their journey, a noxious fog overtook them, but the blazing light of the strange weapon kept it at bay.

A few months later, the fog will surround the island.

The Wabanaki will offer the visitors their hospitality, homes, and food. The Norsemen will stay for a year. Friendships will be formed. Lusty Vikings will hearken to the exotic beauty of the native women, and blood will mix most friendly.

The Wabanaki medicine man and the Norse gaŏi will conduct an exhausting ritual, trapping the evil fog in the Vikings' artifact. They will construct a warding circle on the island, and the Norsemen will take the sword with them so the magic can never be undone. The wailing of women will fade. Memories of unlikely friendships will linger a little longer. They will all vanish from history, these unsung heroes of the Darkness War.

All these things should happen. They have happened. They are happening. But lo...

WARNING! Temporal disturbance detected. A thread comes undone. It pulls and frays. The tapestry tears under the fands of the Hound of the Nameless Days. History is suspect. Time is volatile. Footprints vanish and the past is uncertain.

It could call come undone. What will you do, sweetling? We will see you in time.
Powered by