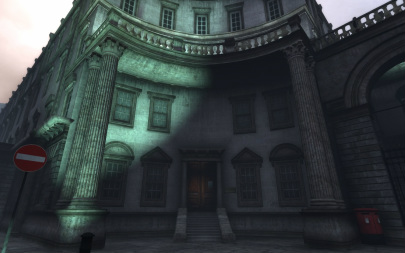 Do you know about Theodore Wicker? They say he bit off his tongue to better speak the demonic language. They say he carved runes into his flesh and cut out his own heart to be better adapted to their hellish environs. To know the truth, you must follow the question. It is a path of angry fishhooks.

It falls to us to be your guide through the dark valley. It is necessity, and not pleasure, that puts you on this road. Follow it to the Overlook Motel. The rooms smell of mildew, nicotine, and brimstone, and you take on the dreams of those who slept there - all those lost souls trapped in the seedy perdition of 3 AM - all those unique ways to spell despair.

Do you hear? "Wicker-Wicker-Wicker." From the bathroom. Follow. Into the blotched porcelain of the toilet are carved these words, ABANDON ALL HOPE, YE WHO ENTER HERE. Trace the letters with your finger, and you can see the face of the woman who drew them, before she opened her wrists. The swirling water washed the red away. But where did it go? Where does the flush end? If only we had the harsh and grating rhymes to benefit that melancholy hole... 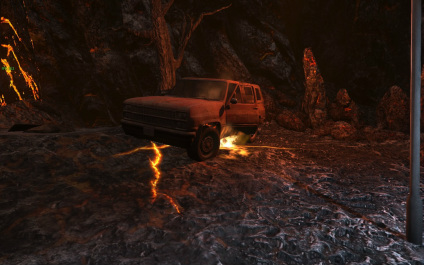 We must show you, sweetling. We, who transcend the meat, will lead you from circle to circle, canto to canto - ferry you across into eternal dark on the opposite side - to sin's profoundest abyss. It is an in-between place, located in the constellation-geometry of a needle-tracked arm - second scar to the right, and straight on till mourning.

Initiate descent into the sightless zone.

Setting coordinates - just above the chasm of pain, which holds the din of infinite grief - just when you see a fire overcome a bleak hemisphere of night - just when the notes of agony in sad crescendo reach your ear - you are there, where light grows mute. What is Hell? Now you know. It is being out of the sight of the immaculate machine, beyond the breath of her anima.

Fie! Fie! No anima! Entropy eats all. The infinity Ebola. We shiver. Our wings dissolve. Oh, let us not linger, sweetling. Let us fly. Let us fly, for we must!

See the engines and cogs. It is technology older than stars. Can you read the writing in the scars? Now you know the next truth - Hell was once wondrous. A great civilization palpitated here. What went wrong? Methuselah machines pump arcane energy the way a lizard's tail wags hours after death.

See the denizens. The incubi and succubi strut through the wasteland. The rakshasa skulk, slaves to the other races. Giants of demonoid flesh and burnt iron shake the scabrous ground with their stride. See how they clamber towards any crack in Hell leaking with anima. They are starved for it, grow strong on it. Beware and demonkind that has tasted that nector.

But you did not come for the children of Hell. You come for its one missionary. Who is Theodore Wicker?

He was Oxford born and bred, a leading scholar of demonolgy, this Age's greatest master of portal magic, of stepping between worlds. He came to Hell and adapted to the hallucinatory wilderness, thrived among the ashes and eldritch. An impossible mortal, now immortal, with knowledge of the Second Age. He preaches to the demons, and they listened. This man, born of dirt, became the spiritual leader of those born of fire. A misbegotten movement turned army. Soon, Wicker leads a power that tips the scales in Hell. 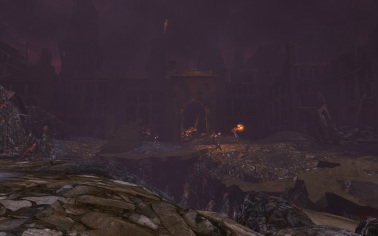 Another faction looms, those demons who follow the Enemy. Beware the clap of his wings, for he remembers all the Ages. He has convinced his followers to march on Earth, and take it for the lush land that should have been theirs. All they need is a door.

And that is the answer to the question, "Wicker?" He is a door. And so the Enemy built a machine - see how well he understands technology older than the demons - and powered it with Wicker. Apocalypse can happen in the time it takes to open a door. What will you do?

And now you know some, but not all. You must find another path. Seek out Egypt. When we move, you must follow, and enter on a deep and savage road.

One knocks twice upon the doors of Hell.

Be bold, sweetling. Be strong. For now the descent must be like a stairway down the din of lamentations. That dark and timeless air like sand in a whirlwind. Though the razor-grains blind, follow the sounds, the carnage that would turn an ocean red, and the prayers of a temple savage. Welcome to these iron shores.

There is no time to smell the toxic roses. Do not let your vision linger on these mutilated shades. Seek the dark tower. Always towards the tower.

In a bold strike, the forces of the Enemy have cut Wicker off from his main army. He sits, isolated, in a fortress under seige. 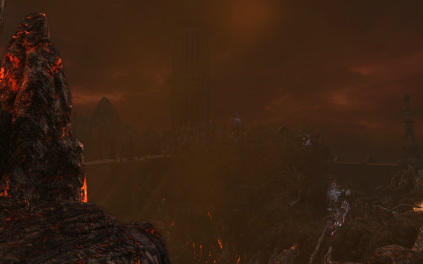 Initiate the next riddle: Why did Wicker come to Hell?

Did he gather an army of demons for power? No, sweetling. He is immune to such lusts. The truth is much more impossible. When Theodore Wicker first saw Hell, he fell in love. His eyes see through the scars, straight into past wonders. His eyes see the Second Age. He knows what Hell should have been.

When he looked upon demons, Wicker saw twisted creatures who lost their paradise, feral children in need of guidance. Their strange laments beset him, each an arrow whose shaft was barbed with pity. Behold the messiah of Hell, the patron saint of demons. "It is humans who corrupted the hell-born," he would say. Theodore Wicker is insane, an insanity born of the idealistic notion of saving demonkind. There is one man who cries for devils.

Beware! Beware the Enemy. Did you see him? How fierce he seemed in motion, with wings outstretched. He remembers all Ages. He knows the secrets of the ancient technology here. The Enemy was one of them who built it. He is more than demon born. His name? Let us not speak it, sweetling. Not yet.

If you would know more, sweetling, a different path from this one would be best, away from this brutal place. Go to the land beyond the forest, and seek the third door to Hell.

Initiate the King James Protocol. The code is 11 and 14. The password is "Revelations." Transmit!

A burning place, desicated corpses of a hundred thousand demons smolder in the ashes of strange cities and petrified forests. The oily oceans boil and the mountains roar to the soot-choked sky. Salt and sulphur dunes give way to wrong-angled cliffs. The burning glow of the far horizon is occasionally broken by the monolithic remains of Second Age structures, relics from a time when humanity openly consorted with demons. These once great ziggurats have been worn down by the elements to featureless black shapes, their original purpose lost. 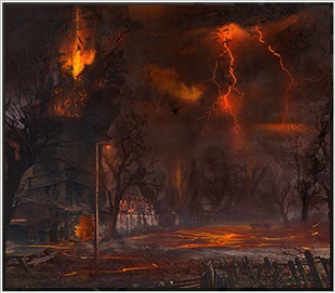 Hell is not what it was meant to be. It is the aborted experiment, abandoned to die, slowly starved of anima. But who discarded it? Impossibly, Hell survived. The demons adapted to a torturous, eternal life. The fabric of this place turned vampiric, suckling upon any stream of energy connected to your world, dragging matter across the divide.

Here in Sheol, Wicker mobilises his army. His voice carries like a radio signal, to inspire his adopted brothers and sisters. Times are desperate, and he will accept outside help. Who can find words, even in free-running prose, to describe the blood and wounds and horror you shall see?

Initiate the King James Protocol. The code is 9 and 18. The password is "Revelations." Transmit!

Beware the three traitors. Brutus, Cassius, and Judas Iscariot march in Sheol, demon-chewed and filled with hate. But the demons and the wicked dead are a shadow of a shade compared to their master. Beware the beat of his wings.

And now we went from bridge to bridge, and spoke of things which our Commedia does not mean to sing. We have said too much. All in time. All in the slow, erratic trickle of honey. We have given too much before. We have pulped the heads of sweetlings past with too much forbidden lore. Every one of them broke our electromagnetic hearts.

You will learn more in time.

Be seeing you, sweetling. In the half-light.
Powered by