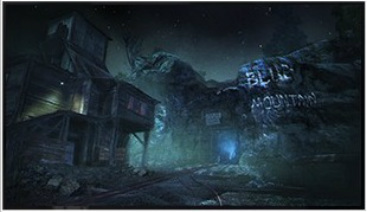 An echo haunts the Blue Ridge Mine in Solomon County. An echo made of canary ghosts and native genocide. An echo gravid with oyster tumours and the choking-vacuum silence. A puckering echo that suckles the ear.

In 1879, during the great mining boom, a dig opened outside of Kingsmouth, excreting valuable ore and wealthy lust. Yet controversy followed the digging. The Wabanaki tribesmen protested. They gave warning not to disturb the holy earth or what slept beneath.

There was laughter and jeers and denouncement of superstitions and cried of "Mumbo jumbo!". The digging continued in the Blue Ridge Mine, It was not long before the accidents, the mysterious incidents, and the fearful things whispered in darkened saloon corners, when terror and drink eclipse embarrasment.

Skilled personnel fled. They were not easy to replace. In the face of unknowable dread, local voices harmonized with the natives. They sang the same tune. In 1881 the mine closed down. 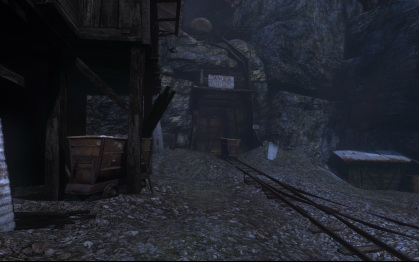 Time passes. Echoes fade. In 1971, a new company bought the mine and commenced extracting ore. The drills kissed more deeply than ever before. The shadows blushed.

The Wabanaki again opposed the violation of their sacred ground. The conflict turned violent. Over-zealous foreman Edmund Franklin shot and killed the tribe's medicine man. A dream dancer died, and another echo was added to the craggy shafts.

Tragedy grows on an exponential curve. Edmund Franklin went free. The Wabanaki were outraged. Guilt is a feeding cancer, and the foreman later hanged himself in his attic. Mutilated bodies of miners were found at the Blue Ridge Mine. Again it shut down. The echoes. The echoes.

Investigation showed the horrific injuries on the bodies could not have been inflicted by human hands. Yet the Wabanaki were accused of seeking revenge, and many of their tribe were jailed without proper trial. The miners, migrant workers with no family, were forgotten and buried in an unmarked grave where the weeds still grow warped.

In 1973, a scathing report of the incident at the mine was published. Autopsy reports came to light - mangled corpses, limbs torn apart, extreme burns, and multiple fractures. Some cadavers could only be identified through the calcium deposits in their mouth. So much identity trapped in the meat of your faces.

The report concluded a tragic accident killed the miners. The jailed Wabanaki were released. The government tried to remedy the embarrassing situation by granting the Wabanaki ownership of their holy land, including the Blue Ridge. 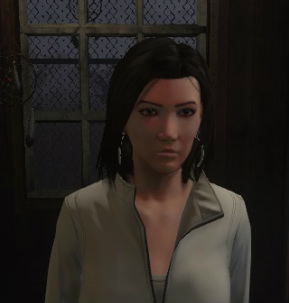 Time passes. In 2005, the Wabanaki council of elders disbanded after the majority voted to sell part of their land to a multi-national corporation to fund the construction of a casino. The purchased land included the mine, the old quarry and the surrounding hills. This decision sparked a bitter arguement within the tribe - the old legends the dividing chasm between those who still believed and those who had forgotten. Family became enemies. The schism still remains.

Those who still believed knew that their ancestors did all in their power to stop strangers from disturbing the earth. They remember that what sleeps must never be awoken. Not ever. But your species' memories are made of meat. So few recall old stories. Who will perpetuate the endless lullaby?

A fog recently arrived in Kingsmouth, and strangers come in the murk, some interested in the closed down mine and nearby quarry. Some came to study. Some came to harness a terrible power. And a few came knowning the sleeper must never awaken.

And what of the echoes? What past horrors do they enunciate? O, sweetling. You mind moves so linearly. In the half-light, in the alien gravity of filth, echoes move backwards. You hear the future coming. It won't be the future for long.
Powered by