Our wisdow flows so sweet. Taste and see.

There is a horror story bobbing in Kingsmouth's harbour. Its name is Lady Margaret. Listen.

The story is encoded in seagull cries. The seagulls eat the bloated bodies, and in the alchemy of their bellies those dead secrets fuse to the essence of the birds.

Can you decipher it, sweetling? No? Those vestigial bits have not fully developed yet - your skull is in its pupa stage - but they spasm when you hear the ranting of the gulls. We can decipher. The gory story drips into the tides, one part per million, and still we can taste it. We will regurgitate it to you - feed you as a mama bird does. 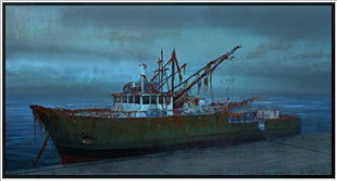 A great storm caught the crew of the Lady Margaret - twisting clouds and waves as tall as houses washing over the deck. Prayers were said, the final kind. The tempest beat the boat, and the crew scrambled to save their cargo. In their toil, a sudden swell washed a mate overboard. The rest watched helplessly as their fellow's head rose twice with the waves. There was no third time.

The waters calmed, and the Lady Margaret remained. A thick fog crept in like a cancer. Mechanical madness. None of the instruments worked. The crew tried to maneuver the craft, but there were no bearings, no direction, no mercy from the sea.

Time passes, first in hours, then in days.

The fog parted as a freak show curtain, revealing a graveyard of ships. Rusty steel, ancient wood Dhows, Viking long-boats, modern frigates, oil tankers, and luxury cruise liners - they all dipped and bobbed in the same water - vessels from all times, all cultures, all covered in red.

What happened next, sweetling? Seagulls are compulsive liars. Let us say an object was found, floating on a driftwood raft. Let us say that a man, designation Joe Slater, dove in and brought it up. Let us say that at that moment, the fog closed on the Lady Margaret with the purpose of a vampire squid's mantle. 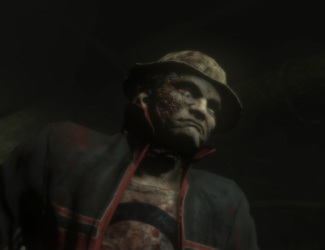 Perhaps the boat rotated, caught in the beginnings of a maelstrom. Perhaps the men looked upon the rotting hulks and saw the glistening movement of lean, slimy bodies writhing in red seaweed like undead otters cracking open skulls for their fruit. Perhaps the fog and the dark conspired to play tricks.

There are fragments of older tales embedded in the seagull screams - mariners' tales of things birthed in dead bodies and dark water. Putrid souls, stippled with eel holes, these uniquiet dead, these hungry dead, with their milk-cataract stare. A few seagulls even remember the name. Draug-draug-draug-draug!

We can suppose the Lady Margaret fled both maelstrom and monsters. The engine came back to life. Some instruments found lucidity. The boat made it's way back to Kingsmouth. The fishermen kept the strange object they found to themselves. Some argued to sell it on the Internet. Others said it should be brought to Innsmouth Academy for identification. They decided to bring it to the esoteric school.

The next day brought the fog. Time passes, first in screams and then in moans.

Joe Slater is the only one left. One by one, his fellows, went away, like the deceptively vicious plot of a children's rhyme. Each is a tiny story in the belly of a different gull. And then there was Joe. But he is just barely Joe. Perhaps it was the object, or the primordial soup he swam through to get it, that passed on the fish-oil leprosy.

It started with stomach spasms that felt like writhing lamprey nests hatching in his belly. Then Joe could hear the hag-fish singing in the crushing depths, even when he pretended he could not, even with the Q-tips snapped in half is his bloody ears. Madness bubbled in his brain like the bends. Then pale flesh. Then barnacle sores and wriggling growths and sea cucumber discharges. Now Joe feels the itch and burn as different species of coral battle for primacy of his chest, splitting up their digestive enzymes in time-lapse warfare. Something scuttles out of one body cavity to be eat by something hiding in another.