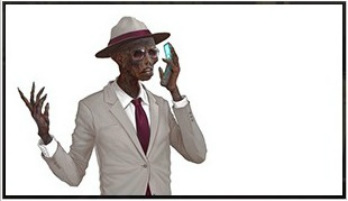 The hand that deftly holds the smartphone is skeletal with rot, skin like old tea leaves. The ears are mostly withered away. A tongue like a dried date waxes eloquently into the receiver, setting the pieces, playing the game. Empty sockets stare from sunglasses. They still have a formidable wink. The drawn rictus always grins knowingly. Frowning is a fad of the living. He smells oddly sweet - honey and the wilted flowers of an absentee lover. With perfect suavity, he adjusts a silk tie and tips his hat.

He shambles away with such an undying style. His name in Saiid. At least, that's the name he would give you. No one remembers Saiid's name. Not even Saiid.

The dapper dead strut the streets of modern Cairo in Armani suits. There are levels of panache the breathing never achive. In the deep shade, they tickle the strings - kingpins of Egypt's criminal underbelly. Hidden, fearless, outside the bounds of any faction - no rules save what they create. Their chests are hollow, but their ribcages pound with lust and debauchery. These embalmed princes persue the one sactity left in this world: money. They are the Kingdom.

Initiate internal scan - dry bodies contain eternal souls. Initiate the secret histories. What is time? We stand outside - everything has happened - everything is happening - into the past - the connecting frequency is the clink of coins.

A bizarre accident - the spark of life hibernates within their mummified husks. Time passes, first in years, then in decades. Their souls rebuild - spirits ever-living, flesh ever-dead. They open their shrivelled eyes. Oh, the shock. Oh, the best laid plans. 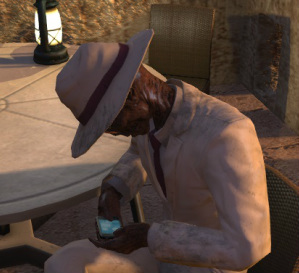 The stumble from their tombs like emerging cicadas who find they have no wings. They are strangers in a strange land. But they find one another, and these men of pragmatism accept their cadaverous existence. They are ment of talent, now united. Why should they lower their standard of living in this afterlife? Their mouths decay into smiles. They gather their funerary treasures, and the forbidden relics of other tombs. Wealthy once more, they hide from the living, and form a decadent underworld.

Time passes, first in centuries, then in milennia. Their dance stays the same - financial acumen and preternatural terror - a hidden empire - a seedy dominion. Cairo is theirs

Politicians and law enforcement think they rule society. They cannot see their own puppet holes or the desiccated hands jammed inside. Civic planning, excavation rights, gambling, prostitution, black market trade - all of these belong to the Kingdom, and they offer access to it for the right price.

There is no morality or loyalty. Those rotted away long ago. There is no grand plan of world domination. The debonair mummies continue their eternal existence.

The internet has been kind to the shamblers. Information and anonymity, all at a touch. The flesh be preserved, but the spirit be willing. Undead, but not anachronisms, they delight in the digital toys of this faceless age.

Recent events bring the secret societies back to Egypt. The Kingdom has no interest in the ethics or politics of the secret world - the struggles between the factions - but they do watch the movements, eager for the opportunity. They offer their services, careful to creep past the eyes of the Council of Venice.

Watch the dead dance, sweetling. They worry not about the living or of consequence. They do not agonise over the insane cults that have crept up in their backyard, who worship the anathema to all life. Why should they worry? They have already died. The worst is past. And the afterlife has been very, very good to them.

Do you hear the static-twinkle of our laughter? We know a secret, sweetling, and now we will tell it to you: there are always worse things than dying.
Powered by