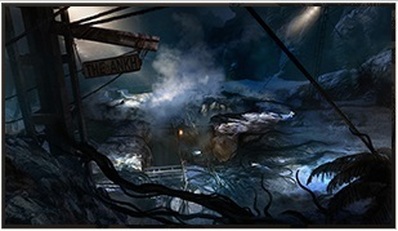 What is time to us? We start outside. A romantic thing is about to happen nearly four thousand years ago. Romance to us, sweetling, but our sense of beauty follows a different aesthetic than yours. The hooked needle enters the nose, like a lusty, lusty proboscis. It pierces the brain and stirs the grey. All memories commingle in a swirling stew. The soup! The soup! It all flows out. A mummy leaves little to tempt the worm.

O, Dr Klein, Dr Klein - we are the only ones to sing his screeching ballad. Would you like to hear it, sweetling?

Go to the desert's edge - to the Valley of the Sun God - to the cliffs - through a gap in the stone. An Orochi excavation camp - empty - high tech equipment hastily abandoned. The recent earthquake uncovered that which should be forgot - an ancient temple of unusual shape. Guttural sounds come from within. Without, a jackal cackles the hymn of madness. Enter the Ankh.

Initiate the secret histories. What is time to us? We stand outside. Everything has happened. Everything is happening. We smell the brick oven of the desert and the gelid funk of aeons, and we are there.

Akhenaten made his first pilgrimage here. On this spot, the Pharaoh commands his slaves to dig, hundreds of lives lost delving for his god. Through shafts and passages in bedrock deep, they reach bottom, as cold as the space between stars, the walls and floor slimed with oily water. The cult of Aten is born from this black-jellied quim of earth.

"Be this the condensed breath of my god," Akhenaten says of the black water. "Harvest it!" A temple is built, so that all may bathe in the ichorous breath of Aten. A pulley system is installed to extract the dark matter below. The baptismal fluid evaporates in the desert air, so ceremonies are conducted underground.

The black water invokes visions during sermons. Embalmers use it to ensure a cultist's service is as eternal as the sun god. Undead cats savage slave children to the musical laughter of the Pharaoh. Time passes - first in a trickle and then in a gush. The City of the Sun God grows. The black water flows thicker, the visions stronger, the deformities more severe. The holy fluid, now a far, flows upward on alien gravity - a living thing - choking passageways in rivulets and tendrils - a crawling chaos.

Some grotesques out-grotesque all and can no longer be endured. The Marya, the Young Warriors, descend on the valley, footfalls sound as cleansing rain. They gift the Aten cultists with the mercy of slaughter. The new Pharaoh commands that the temple be sealed, the entrance to the hollow collapsed. The black water recedes. The darkness waits, monsters skulking in its belly, moaning for their god.

Initiate the now. Digital devices beep for Orochi employees who will never answer. Dr Klein came with the team as an archaeologist. They found the Filth. They found horrors. They found things less easy to define - machines of warped bone and sinew - voices that are not voices that sing lullabies that will eat you in the dark.

The Filth has dried, but flows again since recent events. Urgent - cross-reference with Tragedy in Tokyo! Dr Klein, the ever-studious, still diligently studies and experiments, and the dead are ever so much more cooperative. He works with the mummified clay, and now great Melothat walks the halls as titanic as a plague.

Dr Klein takes his medicine daily, tiny doses of Filth. He fancies himself immune, but there is no immunity to the slime that flows along ninety-nine dimensions his science cannot see. Dr Klein is part of the soup. Now he is more, and now he is less. He has plumbed depths you cannot possibly fathom. His skull is a tentacular snow globe.

Shake it, sweetling. Shake it!
Powered by