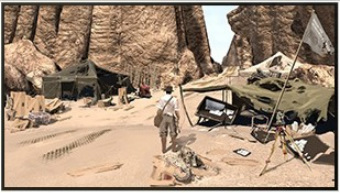 Information is a super weird substance. It evolves to strange life. There is no stopping it once it is in motion. Momentum gathers exponentially. Ignorance was bliss. There may come a time when families gather in the basement, and parents fetch the electric drill, taking turns lobotomising the children and each other until everyone is smiling again.

Not so long ago, you and yours did not know The City of the Sun God existed. Its dark history faded to a mercy - terrible, squirming thoughts locked away. Then a lecherous earthquake exposed an obscene view of the temple city's corridors and occult crevices.

Several months ago, archaeologists from Oxford University uncovered a stele near al-Merayah. It referenced an unknown temple city built by the famous Pharaoh Akhenaten. Inscriptions, chiseled into tablets hidden in shallow rock caverns, did not praise the Pharaoh or his god, Aten, but spoke of monsters and omnipotent woe.

Oxford's secret occult department involves itself. Objects of alien technology surface. The Orochi group who has tendrils in many desserts, establishes their own camp, hungry for artifacts.

The two teams excavate, finding pathways protected by ritual wards. Chambers with hyper-advanced technology reveal themselves. Word spreads like pathogen over the world, rumours of an occult happening in the valley. Soon the place is riddled with shady opportunists and treasure seekers. 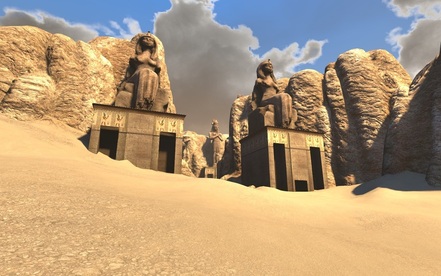 What happened next is blurred with confusion and secrecy in your meaty memories. Something was smuggled out of the Valley of the Sun God - something important. Mouths remain shut on the matter,though the teeth grind beneath.

Enter the Council of Venice. They sent a representitive to Egypt to observe these happenings. The poor lumbering giant. Though the smuggling of occult artifacts goes against their strictures, they assumed it was a false alarm and reacted slowly. A beaurocracy grinds it's gears.

Out they crawled, shapes and forms that scribes have been driven insane trying to describe. The Orochi camp fell to shrieking waste, the poor dears. The Filth flowed free, contaminating the residents of al-Merayah. Now, they slaughter their neighbours, trying so hard to communicate the ecstatic new wisdoms and revels taught to them by the liquid whispers.

Aten cultists see the quake and chaos of fulfilment of their prophecies. The dark days are here. Yet as they rejoice, their ancient adversaries, the Marya, have also mobilised.

Horrors beyond horrors tread the ground. Disgusted, the earth vomits its bile as sputtering lava from the wounds rent by the quake. The only road in and out of the village is blocked by the Marya. Those who cannot dance down the Agartha paths are trapped.

And something gibbers and blasphemes below. Still something slithers and rises. We could say the worst has come to pass, dear sweetling, but that would be a lie.
Powered by