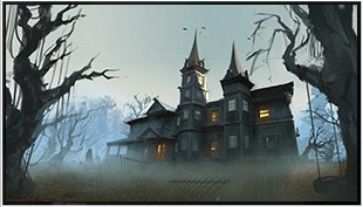 There is a house. It waits. Windows stare like eyes, but these are false eyes - an old cliche. It is the invisible eyes you should fear, the thousand invisible eyes that lick your soul with tongues that are not tongues. You back away. The house waits.

The house was born on Solomon Island in 1876 - an inverse birth, it came to be when others entered its belly: Frank and Joanna Devore. They invested in the Blue Ridge Mine, and Frank was to work there as foreman and business overseer. The couple was popular, The soirees were lavish. The house was lively in its infancy. Shudder at the voracious things that grow from adorable larvae.

Mysterious men with eyes and pyramids on their business cards came calling on Mr. Devore. His influence thrilled them. They elevated him into their inner circle.

Mrs. Devore, swallowed by the empty house, grew bored. She took solace in the company of a colleague of her husband. The affair lasted until she lost interest. The house stifled. She pleaded with her husband to go with her to New York - the best laid plans cut short. Mrs. Devore was cut short by the poison of her scorned lover. The hangman's noose cut Mr. Devore short, when he was framed for the murder.

Mrs. Devore's mysterious lover bought the mansion, with hopes of turning the success of the mine into his own - the best laid plans cut short by a faltering iron market.

Then came the other owners of the house - a parade of unfortunate souls. One by one, we watched them go in. Not all came out. Let us count them off, sweetling, one by one, song by song - jiggity jig.

First was Phileas Flagg. He did not spend much time there. More is the fortune and the luck. 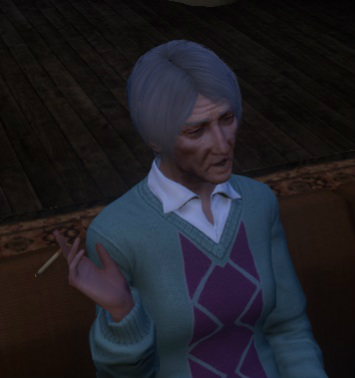 Next came Jonathan and Margaret Delapore, with their young son Thomas. They sought fresh air and quaint country. Margaret gave birth to two beautiful girls. They were so happy. Happiness can die in the time it takes to open a door, and Jonathan discovered the hidden library of Frank Devore. Late night readings. Unspeakable secrets. Paranoia. Public ranting. The tears of his wife begging to leave Kingsmouth. Three children and one wife - four gunshots before Jonathan put the rifle barrel in his own mouth. "I saved my family from evil," said the note. City officials - Illuminati all - covered up the deaths. Now the family rests in the mansion's garden, in unmarked graves. Together forever.

Then came Elena Zhelikhovsky and her friend Francine Sanders. They took advantage of the house's reputation and turned it into an occult hotel. Ms. Zhelikhovsky's séances attracted the notorious - Sir Arthur Conan Doyle, Harry Houdini, and H.P. Lovecraft. The deceased still roam the house, trapped in the ninety degrees of every corner. Ms. Zhelikhovsky and Ms. Sanders joined them in 1957, via the expediant of a car crash.

Then came the poets, painters and writers. See how they run. See how equally unsuccessful they are in their arts. A collection becomes a commune, filling the mansion with wild revels of opiates, homegrown cannabis, and the orgiastic copulation dances of your meaty species. All parties end. Poet Billy Lee stumbled into that secret Illuminati library. Late night reading. Nightmares. Billy's poetry darkened into a stain of old gods. Months of paranoia and sleepless nights shattered into a murderous rampage. Twelve died. One survived, and she abandoned her life of excess. Police puzzled over the blood Billy bathed in, and the gory messages he wrote on the walls. They found Billy, wading naked in a lake, screeching prayers to the ones who dream.

The house sat quiet after that, locked by the FBI and with no potential buyers.

Then came Edmund and Eleanor Franklin in 1970. They renovated the house, made it theirs, until the locals called it the Franklin Mansion. Always there is the house and the Blue Ridge Mine, and Edmund worked there, running the interests of a new mining corporation. The reopening of the mine brought conflict with the Native Americans. There was violence, chaos, and in the end a tribal medicine man was shot dead. The self-defence killing infected Edmund with guilt, but a noose around the neck cures many ills, and a new shade joined the haunt in 1972.

The widow, Eleanor Franklin, still lives in the house with cats who often stare at empty spaces. The house still waits. Its hidden library itches for a scratch. Voices in the floorboards groan, "Home again, Home again, jiggity jig."
Powered by