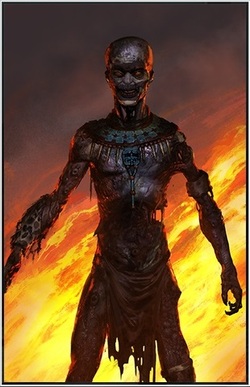 Initiate the prophecy protocols - WARNING - may contain traces of truth.

1,871,995… A mystic of the Second Age prophesied the end of all his kind. He inscribed the details into stone: the destructor; the means; the date.

Imagine yourself then, citizen, skeptic, degree-bestowed intellectic. Imagine and feel. Slowly, the date approaches, the king of all roaches, one crooked step at a time.

What would you do as it passes by?

Step on it. Everyone steps on it! Life goes on. Cue the streamers and booze! Foolish prophet, your prophecy came and went.

Life went on, for five more days. Then destruction descended - so very different from what he pretended. The means were different too. The date, off by a few.

Cue the third coming. There’s nothing like that new age smell.

A scientist of the Third Age calculated the end of all her kind. She lasered the details in the stone: the destructor; the means; the date. 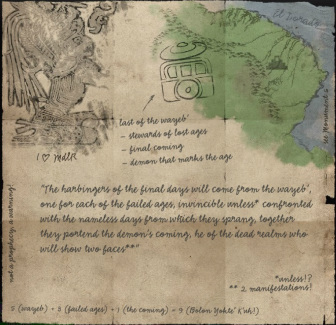 Was all wrong. The rest of it too, off by a few.

O for three. Taste and see.

Cue the Maya Prophecy. A little girl predicted the end of her people. She grew crazed. Someone had set a clock in her head. TICK...TICK...TICK. Scream louder, the voices whispered, scream for each of the days your people have left.

She counted the screams and etched them into stone.

Sticks and stones broke her bones, but dates and stones together - WITNESS - time materialised. Cue the never-ever.

Rumours spread. The date couldn't be suppressed, no matter how hard they scrubbed or how deep they buried. The date persisted.

The date was marked. It spread wings. It grew fat like an animal. Circling villages at night, it fed on the dreams of fools and children. The date became wild and bloated.

THE DATE It came and went, like so many others. The years passed. Silly alarmists, the world won’t end when you want it to.

Life went on. The lords sipped spicy chocolate. They smeared their faces, even as resources in the jungles grew scarce. The girl’s prophecy was forgotten, even as mistakes were made…

Initiate Into the Light signal - SING SONG FOUR - WARNING - getting too close.

The god-kings demanded more elaborate forms of jade, even though the warriors in the north had failed. 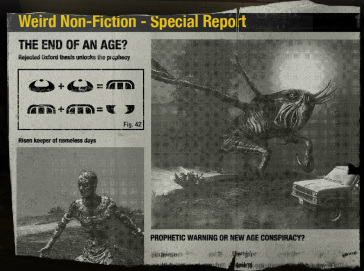 Life went on, as it always does, even as it was slowly slipping into death.

Collapse takes time. There’s no running in the falls of oblivion.

Dates mark the mind, the cosmic swerving, the passages through dark rifts, the sleeper shifts, the beginning of the ends, they’re important to us, sweetling, but misconstrued by you.

1,871,994… It took two hundred more years for the Mayans to fall, a sun-whip societal slip that started on the date the girl predicted.

Initiate the Monument 6 frequency - THE BIG TERRIBLE PICTURE - what academics have sought to conceal - what alarmists have sought to profit by - what the crazed cult feeds with days.

Cue the k’in - a prophecy that feeds itself - SELF-FULFILLING.

Don’t sweat it, sweetling, how could you know?

Cue the cradle of the Nameless Days. Release the jaguar and the leopard.

The ancient truths are all buried in the bookstore. Run your fingers across the spines. Lick the yellow margins. Taste and see. The final Road to Xibalba passes through many houses.

The date was one.
Powered by