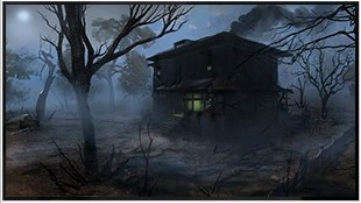 To the abandoned house, at forest's edge, not far from the Overlook Motel.

Ravaged by fire thirty years ago, it hunches in blackened, twisted agony, charred like an ant husk under the searing sadism of childhood. The house is quiet, an ugly aftermath. But we can read the writing of scars.

Inside the Trauma cadence.

Do you see what we see?

Fire burns away so many guilts, but the ashes remain.

Do you see what we see?

No one goes to the Black House. Kingsmouth still feels the guilt, and the guilt has a name. 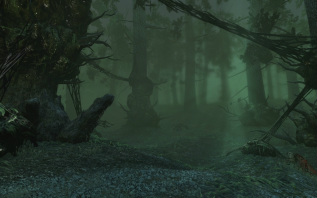 Have you heard the story of Carrie Killian, sweetling?

She came to Kingsmouth and built the house in 1974. She worked from home, offering consultation and help through pagan practices. In those days, everyone like her.

Malefactor detected! There, in the pattern of the ashes. Eye and Pyramid. Do you see what we see?

Carrie Killian was no fraud, but an independent practitioner of magical arts. This concerned the Illuminati. They did not like the way she observed the Innsmouth Academy.

Fire is a powerful tool, your first technology, sweetling. There were meetings in darkened rooms. It only takes a spark. Conniving lips manufactured rumours and planted them in smalltown ears. Fire spread. "She's a bad influence on our children." Bad will and bad mouthing, and Carrie Killian suffered on, still offering her services to the hypocrites who asked for help with one face, and spoke ill of her with another. Fire can get out of control.

Rumour mongering became ostracising. "Fraud" became "freak" became "devil worshipper." "That handsome house" became "that den of evil." A shrieking primate finally gets the courage to poke the curiosity, before running back up the tree, and soon all the talking monkeys are grabbing sticks.

Sometimes fuel gets spilt on the fire. 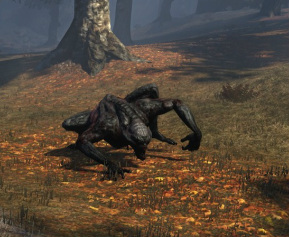 In 1987, several guests disappeared from the Overlook Motel. Those conniving lips whispered new rumours. The investigation proved Carrie Killian innocent, but the seed was already planted in the simian brains of the townsfolk. We visited a few of the mundanes, hovered over their beds and tried to warn them off the coming disaster, but they saw us and lost their simian minds.

When two mangled children were found near Ms Killian's house, it was too late. The torches. The mob. The intent to frighten away, warped by the compiling misunderstandings. The roar of fire out of control. The screams of a woman. The shocked silence of a mob that sees hell reflected in the flames.

Guilt distills into stories until it is palatable. A story formed in every mouth by the time the fire died. "House was already on fire when we got there, and she was at the window, cackling," mumbles a man over his drink. The city council arranged a quick funeral. No mourners showed. Carrie Killian was cremated and buried beneath a cheap gravestone.

The Black House still stands. No one wants to tear it down. No one wants to pick at the scab of their guilt. They cover it up with stories of wicked witchcaft. We listen as the sweet children sing the name Carrie Killian in their jump rope rhymes, the way they used to sing about the Black Plague.

Ashes. Ashes. We all fall down.
Powered by